The Renfrewshire Carers Centre has been supporting unpaid carers in the Renfrewshire area since 1996, providing vital support, information, training and even arranging for breaks for carers from their caring roles.

Being presented with their award, the Centre’s Chairperson, Maureen Caldwell said “Like Scotwest we have also been celebrating an anniversary this year, our 20th. This award will help us celebrate the important work we do here in supporting carers living in the Renfrewshire area.”

Scotwest CEO Kenny MacLeod said “I would like to thank our member Tracy for taking the time to nominate Renfrewshire Carers Centre for an award. We are delighted to support such an important organisation in one of our busiest communities”

Find out more about Renfrewshire Carers on their website here – http://renfrewshirecarers.co.uk/ 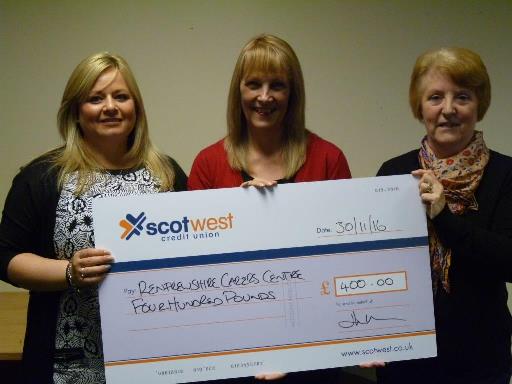 You can find out more about which cookies we are using or switch them off in settings.

This website uses cookies so that we can provide you with the best user experience possible. Cookie information is stored in your browser and performs functions such as recognising you when you return to our website and helping our team to understand which sections of the website you find most interesting and useful.

Strictly Necessary Cookie should be enabled at all times so that we can save your preferences for cookie settings.

If you disable this cookie, we will not be able to save your preferences. This means that every time you visit this website you will need to enable or disable cookies again.

We use marketing cookies to help us improve the relevancy of advertising campaigns you receive.

Please enable Strictly Necessary Cookies first so that we can save your preferences!